Open-access digtization of natural history collections made this art possible.

So did Anna Atkins, Henry David Thoreau, and their curiosity about the natural world.

Henry David Thoreau spent decades of his life in Concord, Massachusetts observing plants and their seasonal behaviors. A pioneer of transcendentalist philosophy, Thoreau took meticulous notes on what he considered the divine processes of spring. He could not have imagined that over a century later, scientists would recreate his observations to document how plants are adapting to climate change. 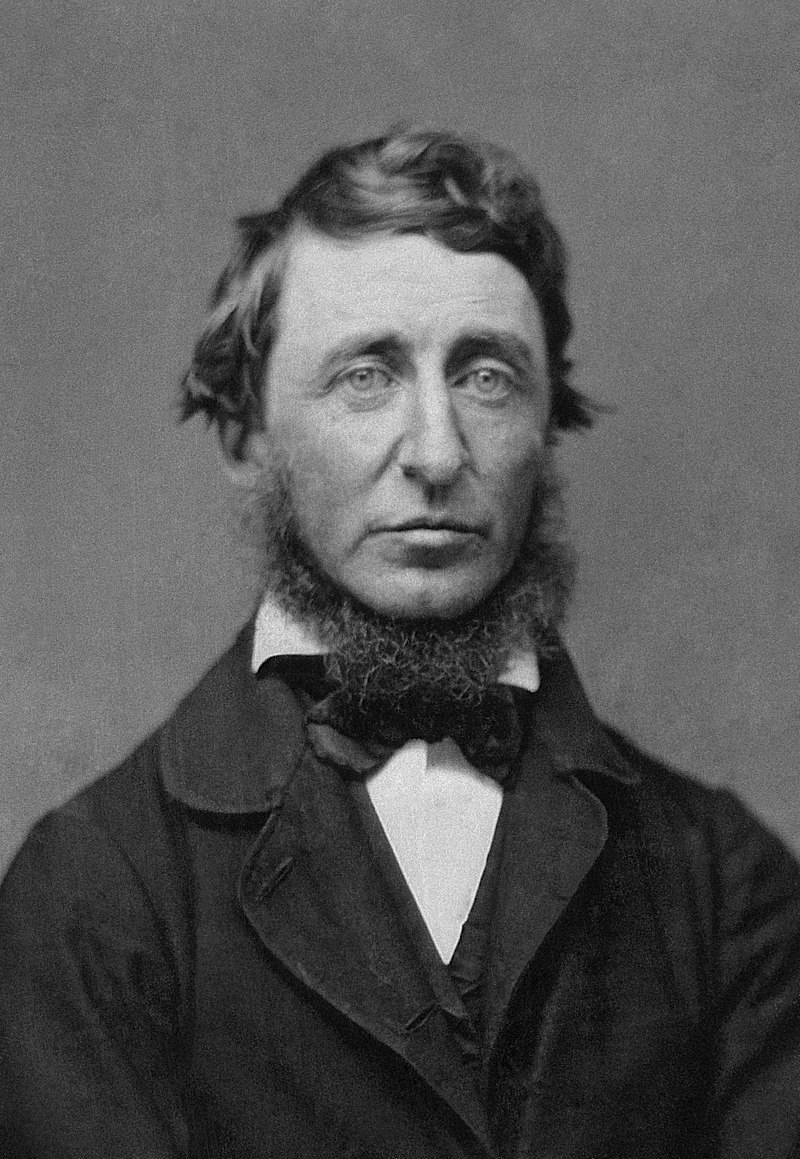 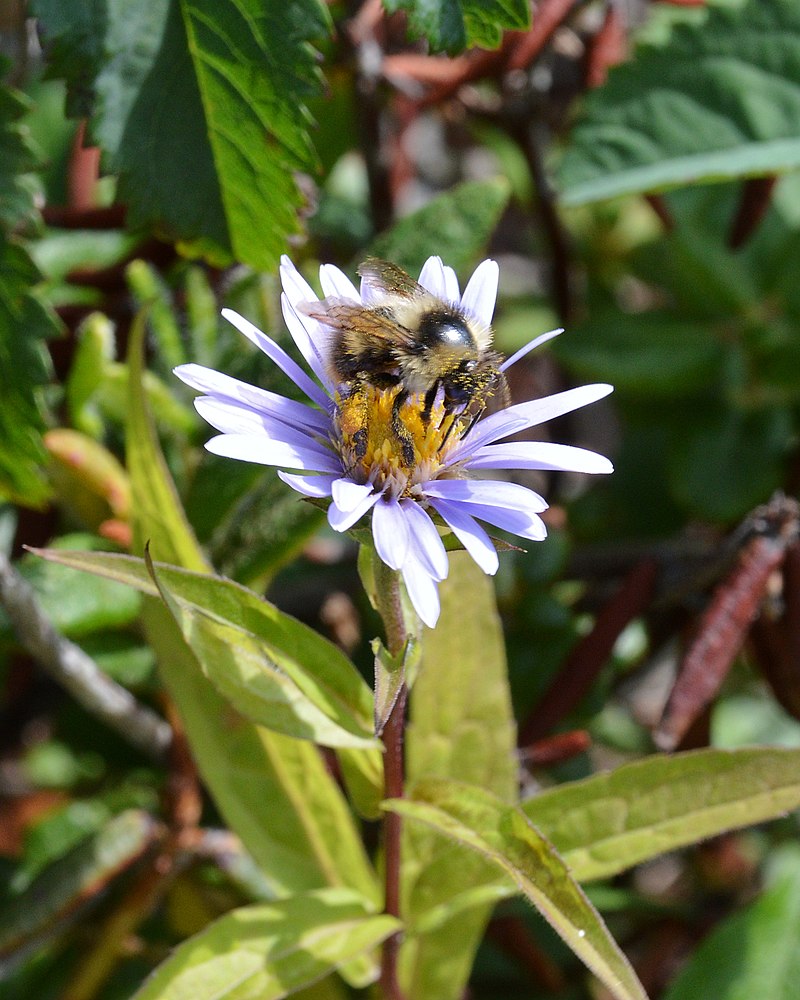 One plant species declining in Thoreau’s Woods is rough wood aster (Eurybia radula). Here it is pictured with one of its pollinators Bombus vagans bolsteri in Crow Head, Newfoundland. Source: Image by Ryan Hodnett

By comparing Thoreau’s observations to current data, scientists have now documented that a wide variety of plant species leaf out and flower earlier now than ever in response to warming spring temperatures. However, some plants keep up with warming better than others. Species who cannot advance their leaf-out and flowering in response to warming are being left behind, and are therefore declining at alarming rates.

To ensure their preservation, herbarium specimens typically remain tucked away in libraries around the world. However, thanks to the Harvard University Herbaria, Thoreau’s herbarium is now freely available in digital form. It is from these digital specimens that we derive cyanotype images printed on masks, pillow covers, hand towels, and other household goods. 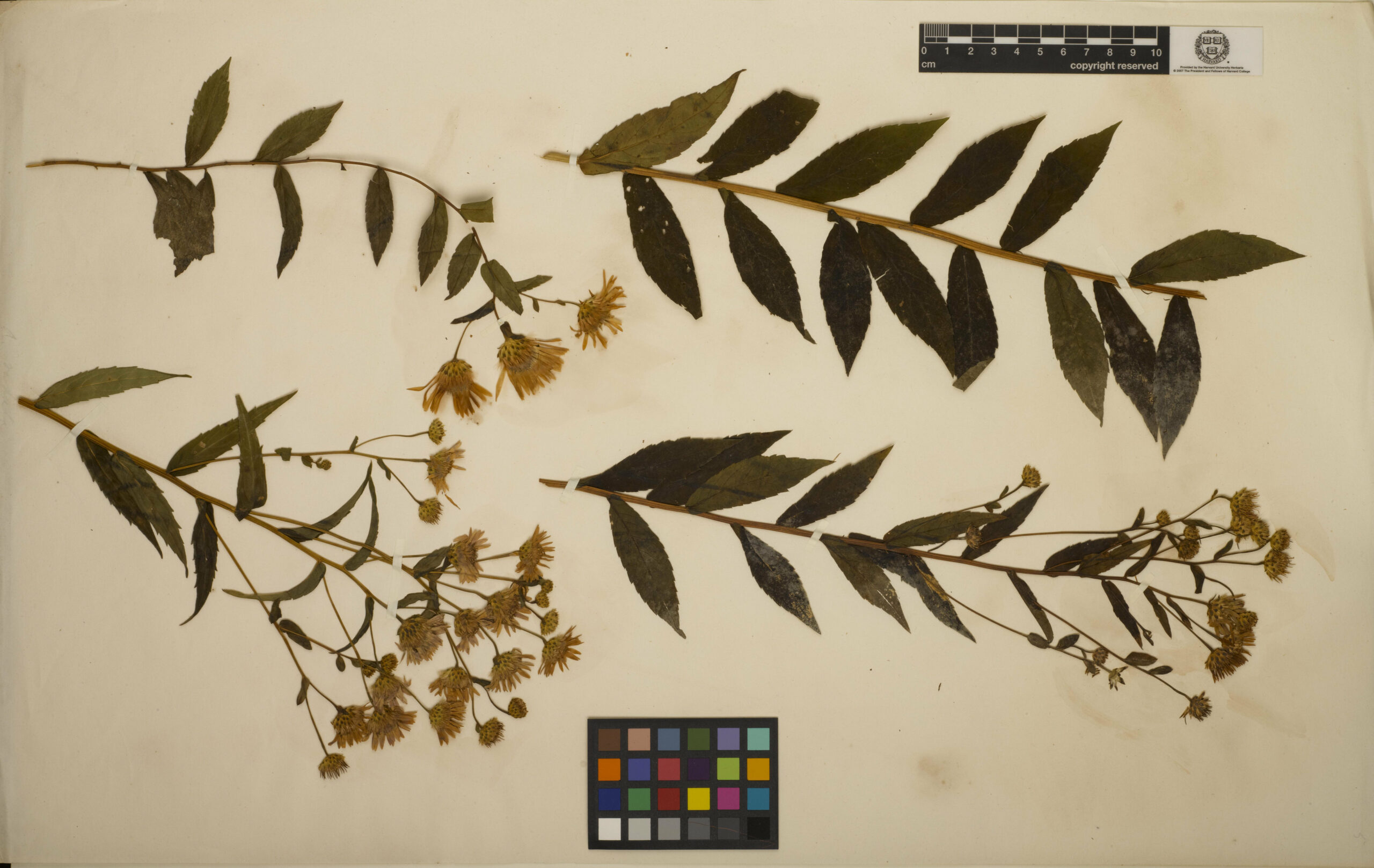 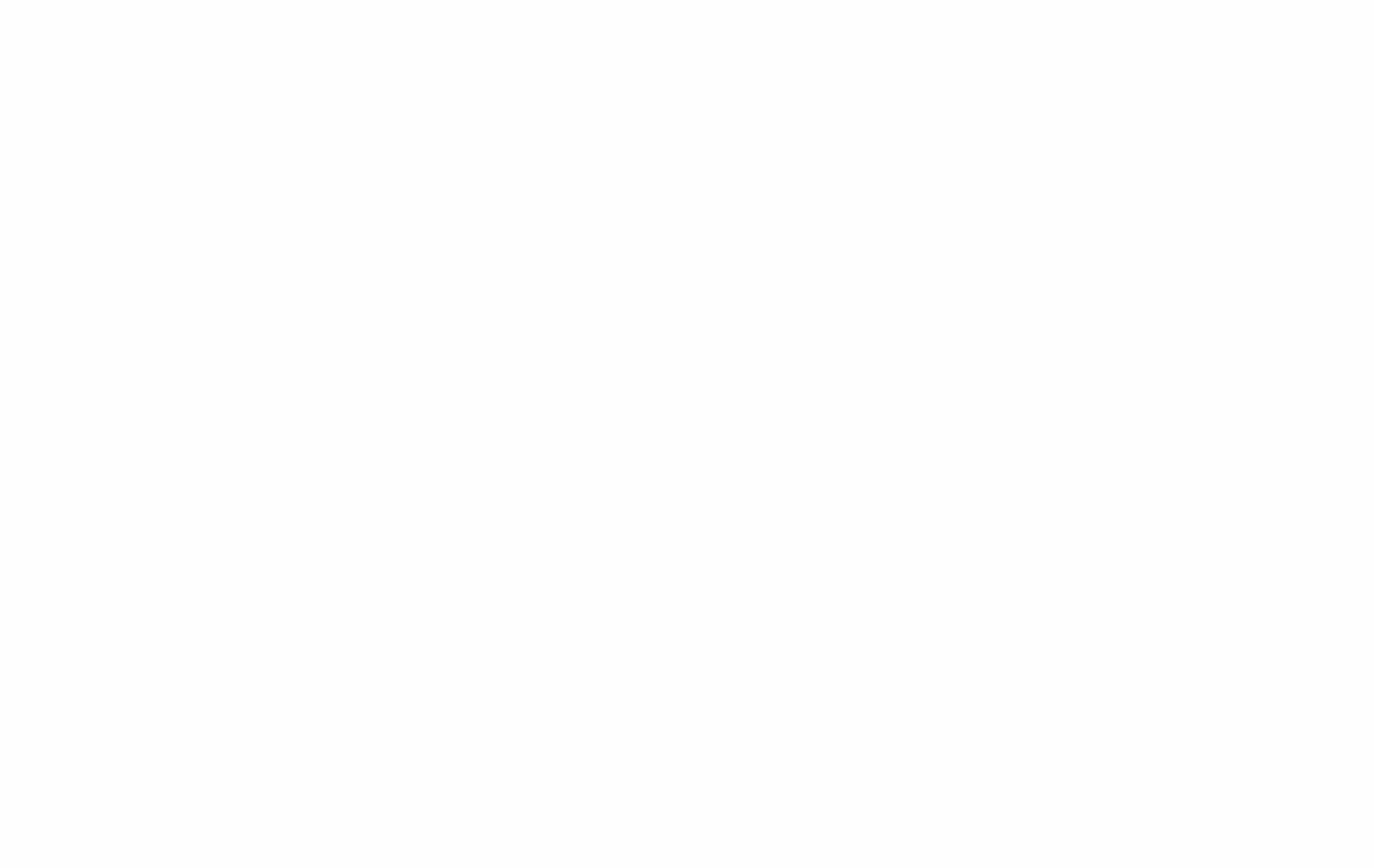 The cyanotype process was invented in 1842 as a way to create copies of drawings. Anna Atkins—a photographer and botanist—was the first to use this process to create botanical images. Her work is still widely revered by botanists and photographers. Textiles in this collection are heavily inspired by her work.
The life histories of species included in The Thoreau Collection are described below.

Cirsium arvense Creeping Thistle is native to the old world. As its name suggests, it creeps along, forming clonal colonies across landscapes. Though it is a declining species according to data from Thoreau’s Woods, it is often invasive in other habitats. Creeping Thistle has abundant nectar eaten by many kinds of insects, including bees.

Galium trifidum Three-pedal bedstraw is native to most of the northern hemisphere, where its long stems dotted with tiny, whorled leaves form wetland mats under which animals like to shelter.

Helianthus divaricatus Woodland sunflower has brilliant yellow flowers that support a diversity of insects across eastern North America, where it is a native wildflower.

Eurybia radula Rough wood aster grows in bogs and other wet habitats. Its flowers are pale indigo with thin, delicate petals. This species is in severe decline across much of its native range in northeastern North America.

Angelica atropurpurea Purplestem angelica grows in swampy forests in eastern North America. It was used by native North American peoples as an aromatic root known for its ability to purify and heal.

Gentiana andrewsii Closed bottle gentian has brilliant purple flowers. However, they are closed to insect visitors except those who can chew through the flowers to reach the nectaries, which are enclosed by petals. Select bees that can make their way inside include species that are in severe decline in the genus Bombus (bumblebees).

Pyrola chlorantha Greenflowered wintergreen is native throughout the north, including both Eurasia and North America. It can be recognized from its green flowers that appear to be nodding. This species is endangered throughout the United States.

Polygala verticillata Whorled milkwort is rare throughout much of its native habitats in northeastern North America. It is small and non-distinct and therefore can be easily overlooked except when it is in flower. Like other members of the pea family, whorled milkwort flowers are made of papilionaceous, or butterfly-like, petals.

Additional plant species featured in our products from Thoreau’s herbarium specimens that are not documented as declining include:

Hypericum gentianoides Orangegrass is native the eastern and central US and extends its range north to Ontario, Canada. When rubbed together, the leaves smell like citrus or peach. It’s flowers only open when they’re in the sun.

Agrostemma githago Common corncockle was imported into the US well over a century ago, probably on European wheat plants. Though it spread across new continents, it is threatened with extinction in its native range. Common corncockle blooms range from red to blue to purple to white.

Bidens beckii Water marigold is a daisy that establishes in slow-moving or stagnant water. This species is able to make its home in lake or pond edges or slow-moving rivers. Some of its leaves touch air, but many are submerged in water and resemble gills.

Polypodium vulgare Common polypody is a fern species whose origins lie in Africa and across Eurasia. It can be used as an ornamental ground cover in yards and prefers moist habitats.

Dicksonia punctilobula Hay-scented fern is native to the US and continues to live throughout the Appalachian region. It can inhabit a wide range of habitats, including forests under closed canopies with almost no light or areas where canopies are open to the sun. Its colonies are considered pestiferous in areas where they become dense in response to abundant sunlight, such as in lowbush blueberry (Vaccinium angustifolium) fields.

Lygodium palmatum American climbing fern is threatened or endangered across much of its native range within the US, where it is the only native species within its genus. It can climb up to 2.5 meters and requires specific conditions to grow, including very high light levels and no shade. It is sometimes harvested for Christmas decorations. These features are thought to combine to explain its current rarity.

Paronychia canadensis Smooth forked nail-wort has small, cup-shaped flowers and is listed as threatened in many states within the US, where it is a native chickweed. It grows in prairies and savannahs and is thought to be declining because of loss of these native habitat types in favor of residential and commercial development across its range.

Medeola virginica Indian cucumber is a native species to north America that grows in forest understories. Underground parts of this plant are edible and have a faint cucumber flavor. However, it is in the lily family and is only distantly related to cucumber.

Solidago odora Sweet goldenrod is a widespread North America species whose leaves smell like anise when they’re crushed. Goldenrods are used by birds and other pollinators, including butterflies, and sweet goldenrod is used in traditional herbal remedies.

Alisma plantago Common water fern grows in shallow water and mud. It is native to Eurasia and Africa and was introduced into the US. It can be easily cultivated in small ponds.

Athyrium filix-femina Lady fern prefers shade and, like many ferns, grows in the understory of forests. Unlike many fern species, however, it is distributed across the entire US. In addition to its abundance in natural habitats, lady fern’s lacy delicate fronds make it a popular species for cultivation. Young fronds of this species are edible once cooked and were once a common food for some Native Americans.

Nymphaea odorata White water lily is native to much of the US and Canada, where it grows in the shallow edges of ponds and other bodies of water. Its characteristic white flowers, which float above the water, are pollinated by a variety of insect taxa, including beetles and bees.

Equisetum scirpoides Dwarf horsetail is a cold-loving species native from just south of the Arctic Circle to the northern US. Horsetails are closely related to ferns and are mostly composed of shoots that resemble thick grass.

At the foundation of Puritea and all that it means, is appreciation. Presently acknowledging what tea has given, and will provide in the future, encourages us to keep our tea as it was originally envisioned, while bringing an elegantly flavorful and original experience to you.